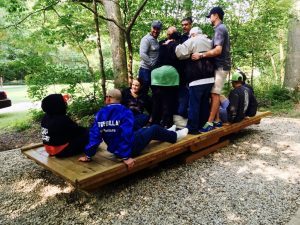 Whale Watch: Group trying to “escape” being out of balance!

She writes there are over 2,300 escape rooms in the United States. TripAdvisor says there are seven escape rooms in the Asheville area. If you are not aware of these places, they are rooms where you gather with up to 7 other people and try to beat the clock and “escape” a challenge. Sugar says escape rooms feed “the desire to escape whatever reality you’re in.”

As I read this article, I realized this is the foundation of my work. I’ve been facilitating groups and teams since 1996 and took a big leap in 2001 going to Camp Joy to be the Director of the Venture Out!, corporate organizational development.

I help groups and teams “escape their reality” for one to three days. I’ve facilitated these “escapes from reality” at all kinds of venues including cruise ships, MLB ballparks, zoos, fine dining restaurants and Disney World! During that time, I create opportunities for groups to experience a series of “escapes” to energize, discover and learn new skills. Some of my favorite “escapes” include Blind Cube, Whale Watch, Spider Web, Searching for a Black Cat in a Black Room, Survivor and the Pamper Pole! Even MBTI or EQ workshops are a form of “escape” and open doors to learning.

Sugar says the best escape rooms create a “WOW” moment where you and your teammates overcome a shared challenge. My goal with “escape” initiatives is to create “AHA” moments. This is when participants have a breakthrough and see the possibility of transformation to becoming a better team. I’ve had participants share they’ve gotten to better know and understand their cohorts in two-days than the five-plus years they have been working together! That is some serious connection!

I agree with Sugar, “…in escape rooms (as with experience-based workshops), it all matters. There is a beautiful elegance to it: You crack the code, it unlocks the lock. It’s not only surrender, but communal surrender.”

Do you feel the need, the sense of urgency to escape some work reality with your team?